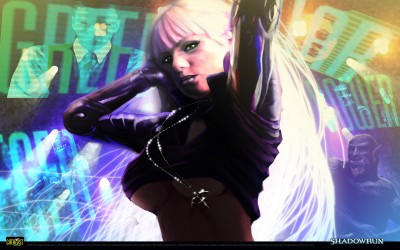 The PDF contains 34 pages and is separated in some mayor parts.
As usual you get an Introduction chapter, which should help the gamemaster preparing for and running the adventure.
It also defines the general rules for this adventure, which is an addition or reduction of the standard Shadowrun Fourth Edition ruleset (keep in mind that Shadowrun Missions is a campaign to be run at faires or conventions, though many use it as regular adventure campaign, like myself).

Like in previous campaigns there are several NPC characters and factions available, which can have an impact on future missions of the same campaign. During the campaign the player characters can make certain decisions which favor one or another faction and they get faction points. That way the gamemaster can measure reaction and actions of certain faction parties concerning meetings or activities with the player characters.

After the general rule information there is a short summary about the mission itself. I will not spoiler any of the mission content here.

The following chapters describe certain scenes in which a part of the mission takes place. It begins with a transition chapter in case the player characters are transfering from the previous mission campaign in New York. Each scene has certain subchapters: a chapter with a text which can be read to the players directly, some behind the scenes information describing details to the gamemaster to build into his description of events. Pushing the envelope gives some help to the gamemaster how to handle certain events, and Debugging describes how to handle bad or problematic player behavior which threatens the campaign itself.

There is a lot of artwork inside the PDF, and it’s colored! Not the usual black&white picture, there are really nice full-color, well modeled pictures inside, for example the contacts and NPC. There are also maps and floor plans for key locations. Handouts and the debriefing log at the end are standard additions like in previous mission campaigns, but also in a high quality and in color.

My summary is: it’s a well designed new mission campaign with very good artwork and finally in Seattle again! Definetly worth the $3.95. Some people were shocked because the first mission was supposed to be free, but … hey chummers….its worth evers buck!