Welcome to Cliffhanger Productions’ first ever newsletter for the upcoming Shadowrun Online game.

This being our first official newsletter I apologize in advance for the less than glossy appearance and the fact, that it took us a while to even get one out.

Here at Cliffhanger Central we have been busy sticking it to the megacorps and trying to go solo on developing the game. So far we have gained at least enough creds to go into pre-production and will kick off our development next month. That being said – if any of you can spare a Million or two, we are happy to help you spend it. But until the money comes raining down on us, here are some answers to the questions we get asked the most:

Well, it will have a perspective camera in a 3D setting, much like our Jagged Alliance Online game, which we are currently developing. (for a peak at that one, you can go to http://www.digitaltrends.com/gaming/jagged-alliance-online-preview-a-classic-reborn-for-the-browser/ , who have the latest info from our gamescom version.) So, it will be a decent quality, but it won’t be what some call AAA. The reason for that is simple: We are doing a browser based game. This means anyone can access it at any time from their PC, no downloading, no hassle. But that also means we need to limit visuals. I hope you agree that gameplay is king, so we think the visuals are decent enough. 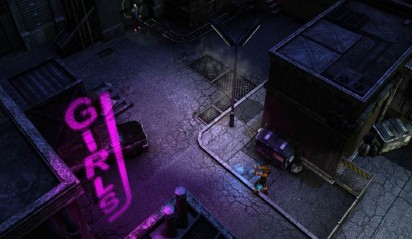 What can you tell us about the game?

Well – not too much yet that is going to actually stay that way. Some of you may have followed the discussion we had over at the Dumpshock forum and we continue to get good input from fans. We have also secretly launched SHE – the Shadowrun High-Council of Elders, a group of current and previous editions writers and artists and Shadowrun alumni who have worked on the pen and paper game or had their hands in Shadowrun Mods or community work. They will make sure we don’t stray from the path of righteousness and continuity in adapting Shadowrun to the world of online games. We are going to work closely with Catalyst (American Shadowrun publisher) and Pegasus (German Shadowrun publisher) and may have some nifty surprises for you further down the line.

Enough already – what about the game?

The game will feature two major parts – the action map, where you (and your friends) do missions from stealthily infiltrating a secret Renraku research facility to punching the lights out of a major Aztechnology outpost with guns blazing. Hacking, magic and gunfights are all part of that and will be done simultaneously (so nobody needs to go for pizza while your hacker battles Black ICE for two hours).

The second part will be the legwork and mission preparation. This will happen on a city overview map, where you can try and use your contacts, skills or resources to gain info on the mission goal, acquire blueprints, bribe guards or prepare the right soft or spell for your endeavor. This will be closer to rolling the dice on an action and getting a short narrated outcome. Each of those actions will cost action points (and if you want to get better odds you may want to spend more action points on a specific objective).

So if you don’t have the time for an extended session, you may just want to spend a couple of AP to prepare and make sure you get the most out of your mission when you actually want to tackle it.

But I have a million more questions!

Of course there is much more to be said, but most of it is in a very early stage and we haven’t decided yet on how exactly we are going to do that. We are currently in full swing on our Jagged Alliance Online game, so thing are a little busy round here. But I promise we will give you more news as we progress.

In the meantime, why don’t you take a gander over to our Forum and ask questions there?
Until then, we will see each other in the shadows…
Primetide