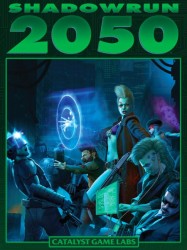 Rewind and Reload
Chrome eyes. Computers called “decks.” Big hair, big cyberlimbs and bigger guns. It’s Shadowrun in the year it all started. Take a step back to Shadowrun’s roots with Shadowrun 2050, a book that combines Fourth Edition rules—the smoothest, most accessible rule set Shadowrun has ever had—with the setting that first made the Sixth World a legend.

Shadowrun 2050 has everything players and gamemasters need to dive into the grimy beauty that kicked off one of the greatest roleplaying settings of all time. With information on how to adapt Fourth Edition Matrix, gear, and magic rules for the 2050 setting, as well as in-universe information about the powers of the world, what shadowrunners will be up to, and who they’ll be running into, Shadowrun 2050 puts a new twist on the classic setting.

Captain Chaos. Maria Mercurial. The Laughing Man. Sally Tsung. JetBlack. Hatchetman. Nightfire. And the Shadowland poster who just called himself The Big “D.” These people and many others are waiting for you in the year that started it all, a setting brought back to life with new, full-color artwork showing the chrome, dirt, neon, and darkness that was in the heart of Shadowrun when it started and remains at its core today.