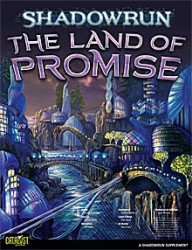 Tír Tairngire Wants You!
Tír Tairngire has changed. The predominantly elven nation has an ork at its head, and the residents have become more welcoming to outsiders, in the sense that they don’t always immediately threaten to shoot them when they come in sight.

There is enough wealth and power in Tír Tairngire to make even the slightest crack in the nation’s façade tempting. Every shadowrunner knows that elves, especially powerful elves, do not rank high on the trustworthiness scale, but that doesn’t have to be a deal breaker. Anticipating lies and betrayals from the people runners work with is part of the game. Runners should just be sure to gather critical information about getting in to the Tír, the major cities, and the dominant personalities before they go in, since forewarned is forearmed.

Land of Promise is the resource runners need to get caught up on the current status of Tír Tairngire and its leaders. With adventure seeds, profiles of notable personalities, and essential demographic information, this is a critical resource for anyone living in or near the elven nation’s shadows.

Land of Promise is for use with Shadowrun, Twentieth Anniversary Edition.